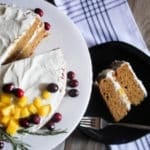 To make the cake:

To make the frosting:


*As with all gluten free baking, PLEASE weigh your flour to ensure accurate results.
**It's important to add everything as written. If you add baking powder to molasses and let it sit before baking it, it will affect results. You also don't want to leave beaten egg whites too long or they will deflate. Follow directions as written.
***Your crumb coat layer of frosting will turn a mottled brown from the cake. This is normal! The cake does also get mottled brown/white finish after it's all decorated if you let it sit. So, if you want a pure white cake, frost it and serve immediately.